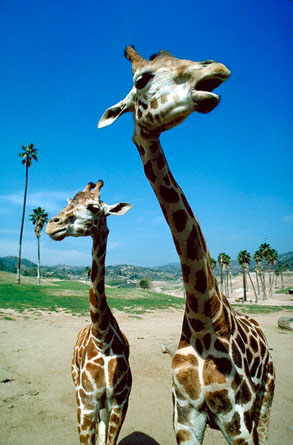 These are Giraffes! They live in groups in the grasslands of Africa. At up to 17 feet tall, they are the world's tallest land animals. The Giraffe has long legs and a long neck that make it really tall. They use their long necks to reach the tastiest part of the tree - the very top! They like to eat all kinds of plants such as acacia trees, vines, and bushes. Male Giraffes eat the highest leaves and female Giraffes eat leaves that are a little bit lower. This ensures that both sexes get enough food because they are not competing for the same leaves. Giraffes use their long tongues to grab the vegetation they eat. They pull branches and vines through their teeth to scrape off all the yummy leaves. Giraffes get most of the moisture they need from the plants they eat. They can go up to a month without drinking. If they do drink, they must spread their legs wide in order to lower their long necks to a pool of water. Giraffes have another neat feature: horns! They are born with their horns flat on their skull. When they are about a week old, their horns pop up. Giraffes have spotted fur that camouflages them. The spots on the coat of Giraffes are kind of like fingerprints on people, each Giraffe's spots are unique, unlike any others'. Giraffes have a great sense of sight. Their tall stature and sharp eyes help them stay on the look out for lions and other predators that may be out to hunt them. If they feel threatened, Giraffes stay in a group and attempt to run to safety. They can run at about 35 miles per hour. Most Giraffes only live about 5 years in the wild, but a few make it up to around 30 years. 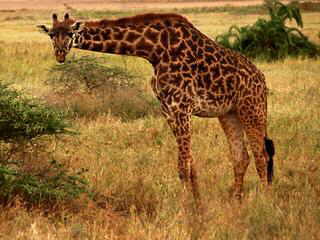 Here are some cool facts about Giraffes:

Back to Big & Tall

Back to Quillo's Online Zoo